First of all, I have to apologise: I didn’t manage to make all the squares. This is a combination of many things, amongst them serious lack of time and a serious running out of yarn! So rather than buy more and get on with the joining et.c. late, I decided to take a short-cut and make my blanket a bit smaller. I am also really, really needing a new bed-spread, so the faster it is finished the better!

So apologies for not being able to give guidelines on all the squares – I only managed to make 20. However, hopefully how I have dealt with the ones I did do will be a pointer as to how the rest can be adjusted if need be. I made all my squares with Drops Alaska 100% wool yarn and a 5 mm hook, so I made all adjustments by adding or leaving out or changing rounds. With some of the squares I didn’t make adjustments as I went along, which has resulted in me having squares measuring anywhere between 10” and 12” when blocked. Most of them are around 11” or 11,5”, and I have decided to make them all 11,5”. Sometimes you can stretch them when blocking if you know what dimensions you are aiming for, but I personally don’t like stretching too much, and would prefer adding or taking away rounds rather than ending up with some squares looking very stretched compared to the rest.

Below you will find all the squares I made with a description of what adjustments I have made, if I made any. All terms given are US terms.

I didn’t add any rounds when I made it and it measured 10” when blocked, so I added 1 round of treble and 1 round of single crochet.

Week 3: Stephan by Esther Dijkstra of It’s All in a Nutshell

I realised when making it that it was very big, so I substituted the round of backpost treble in Round 12 with a round of single crochet..

Week 4: Vincent by Esther Dijkstra of It’s All in a Nutshell

It measured 12” when blocked, so I frogged the last two rounds and instead added a round of double crochet and a round of single crochet. 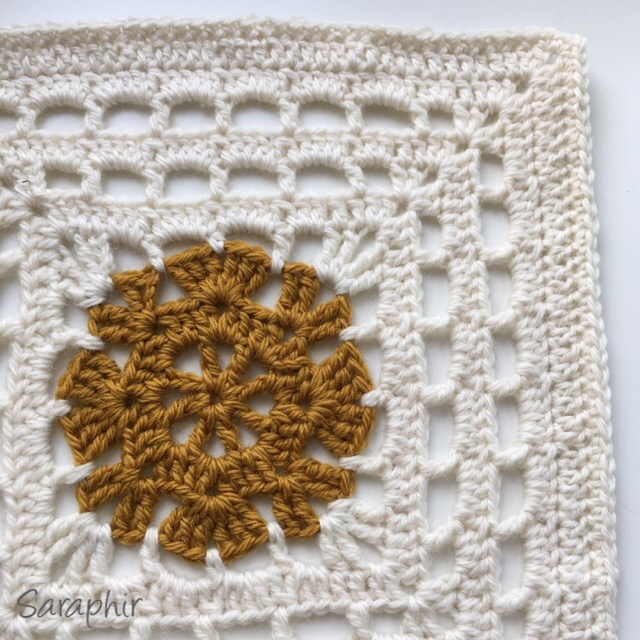 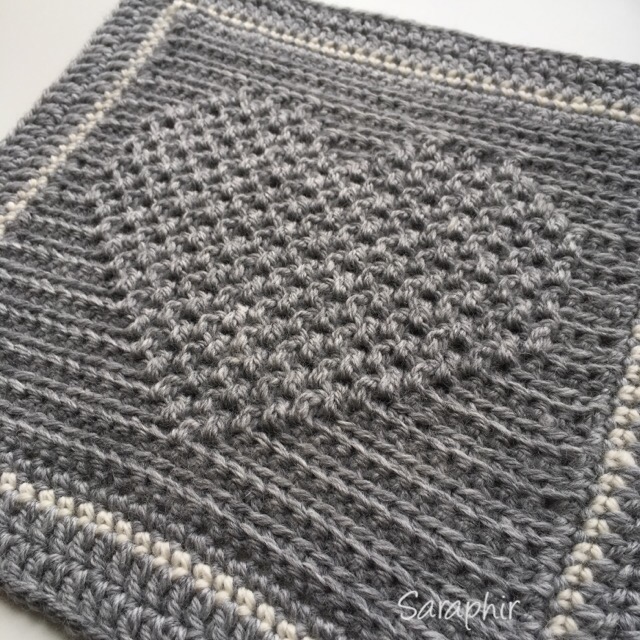 Week 7: Rosetta by Helen Shrimpton of Crystals and Crochet

It measured 11” when blocked, so I added a round of single crochet. 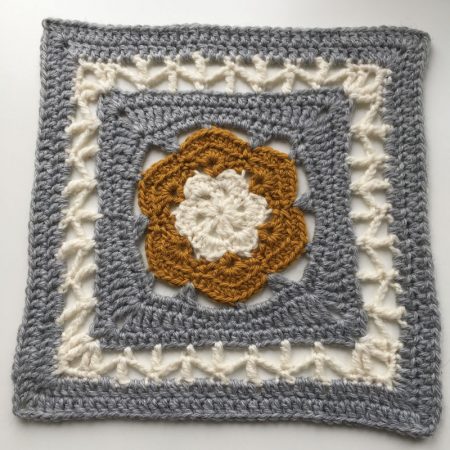 Week 8: Desire by Helen Shrimpton of Crystals and Crochet

It measured 11” when blocked, so I added a round of single crochet. 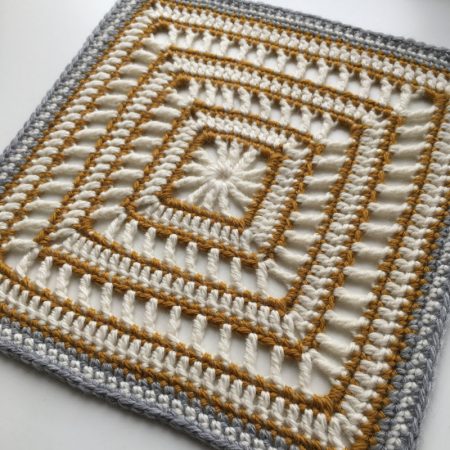 It measured 10.5” when made unblocked, so I added a round of half double crochet. 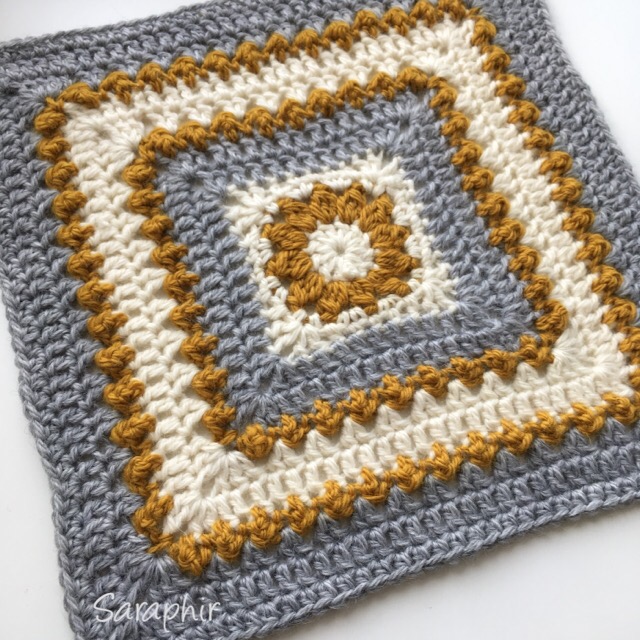 When blocked it measured 11”, so I added a round of single crochet.

I added a round of double crochet before the final round when making it. I used the same principle as round 7.

Week 17: Marigold by Polly Plum of Every Trick of the Hook

Week 18: Spiked Punch by Polly Plum of Every Trick of the Hook

I changed the last round from single crochet to double crochet. 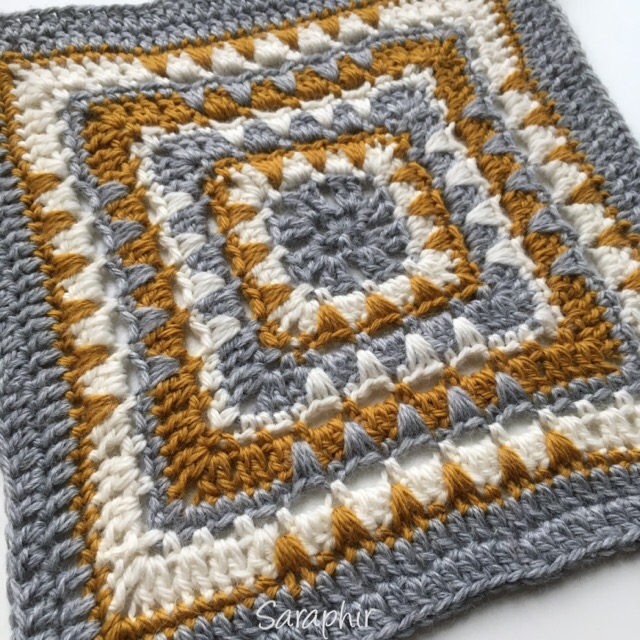 It measured 12” when blocked, so I frogged and in Round 11 I made a 3 ch starting chain and substituted all double crochet with half double crochet. I completed Round 12 as instructed apart from changing the corner space from 3 single crochet to 1 sc, 2 ch, 1 sc. It now measures 11.5”

Week 20: Diamonds and Petals by Chihuara Allen of Keito Palette

It measured 12” when blocked, so I frogged the last round of single crochet.

I left out the last round when making it. 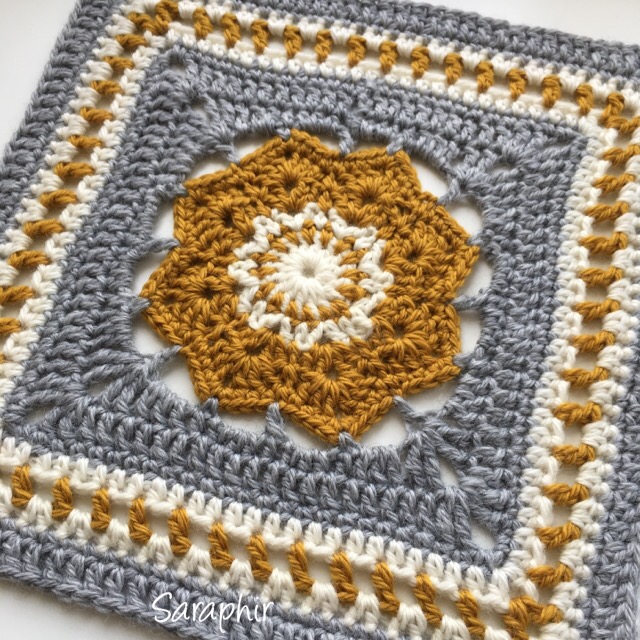 So these are the 20 squares I managed – and I love them all! Apologies to the designers of the ones I didn’t manage and couldn’t include here, time has just been very short these last months with my own work going on as well.

It is not too late to start the CAL. All the patterns will remain available and free forever and the benefits of starting late is that you can take advantage of other people’s experience! You can find the links to all the patterns on the CAL blog.

Things Men Have Made

Things men have made with wakened hands, and put soft life into

are awake through years with transferred touch, and go on glowing

And for this reason, some old things are lovely

warm still with the life of forgotten men who made them.